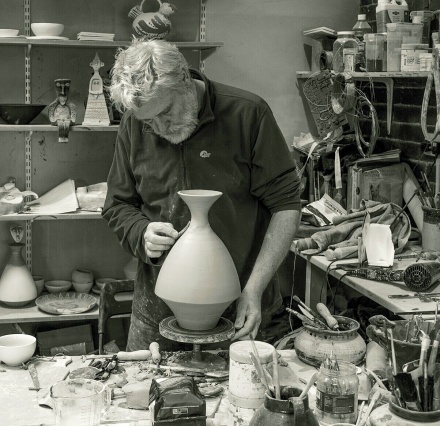 Michael Woods Studio is based in Suffolk on the east coast of the UK. Originally from South Wales and then based in central London for many years, Michael relocated to the pastoral beauty of east Suffolk where he works from a shared ceramics studio and his own screenprint studio.

As a sculptor, Michael’s work is currently focused on the form and shape of the ancient pottery traditions, realized in a contemporary style. Inspiration for Michael’s designs comes from his interest in indigenous cultures and their artworks and from the British decorative arts tradition.

His working practice has developed by using the ancient techniques of the hand built coil pot in stoneware, worked to achieve various textures and decorated with natural oxides and accentuated with contemporary glazes.

Michael has always worked in the creative industries and his expertise includes creative and strategic consultancy, brand development, large-scale retail exhibition and promotional display design. After many years in central London, Michael relocated to Suffolk to devote his time to ceramic sculpture and graphic illustration. His work has sold at the Affordable Art Fairs in London, Stockholm and New York, The Cut arts centre in Halesworth, Suffolk and to private collectors around the world.

In 2017 a new venture,  Tricksterville Publishing, dedicated to letting loose the trickster on the modern world was launched with ‘Reynard the Fox’. Illustrations of the trickster beast by Michael Woods are based on extracts from the Twelfth Century Old French, ‘Roman de Renart’, translated by collaborator and author Robert St Cloud.