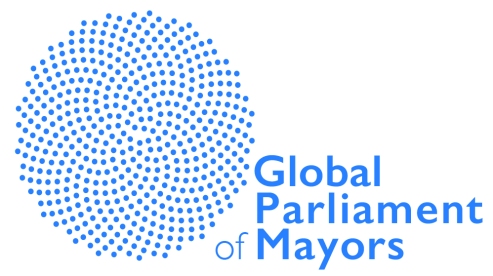 The Global Parliament of Mayors (GPM) is a governance body of, by and for mayors from all continents. It builds on the experience, expertise and leadership of mayors in tackling local challenges resulting from global problems. At the same time, it brings local knowledge to the table and thus participates actively in global strategy debates and underscores the need for practical, action-oriented solutions.

Eileen Haring Woods worked alongside the GPM Founder, Dr Benjamin Barber as the Executive Director for the Global Parliament of Mayors Project, through June 2017 and is currently a member of the international GPM Advisory Committee, helping to steer the further development of the GPM.

In the face of the most perilous challenges of our time—climate change, terrorism, poverty, and trafficking of drugs, guns, and people—the nations of the world seem paralyzed. The problems are too big, entrenched, and divisive for the nation state. Is the nation state, once democracy’s best hope, today dysfunctional and obsolete? The answer, said Barber in his book If Mayors Ruled the World: Dysfunctional Nations, Rising Cities, is yes.

Barber asserted that cities, and the mayors that run them, offer the best new forces of good governance. Why cities? Cities already occupy the commanding heights of the global economy. They are home to more than half of the world’s population, a proportion which will continue to grow. They are the primary incubator of the cultural, social, and political innovations which shape our planet. And most importantly, they are unburdened with the issues of borders and sovereignty which hobble the capacity of nation-states to work with one another.

In April 2017, Dr Barber, our long time friend and colleague passed away. It was an honour and a privilege to work with him on the development and realisation of the GPM, Interdependence Day and many more global projects. He is greatly missed.

6 July 2020 – Because of the ongoing Covid-19 pandemic, the Executive Committee has announced that the GPM Annual Summit is postponed to next year and will take place on 17-19 April 2021 in Palermo, Italy. The GPM is thankful for the support of Mayor Leoluca Orlando as host of the GPM Summit. Especially now, in times of uncertainty caused by the Covid-19 pandemic, solidarity among mayors, cities and its civil society is even more important in helping city leaders to cope, understand and overcome the crisis. This makes it all the more necessary to come together next year on 17-19 April 2021. We hope to welcome the international community of mayors, city networks and experts. The City Council of Palermo guarantees to make this Summit unforgettable by debating on current issues and find new solutions.

Strategy and implementation of content, attendees, culture for the 2016 inaugural
convening in The Hague.

Consultation with Socioneers on the GPM Mayors App.

Member of the Advisory Committee May 2017 ongoing.

Participation at GPM 2017, Stavanger, Norway  and Interdisciplinary workshop on cities and culture with Charles Landry.

Concept and artwork of the GPM logo.