I LOOK TO YOU

“Over 28 days 28 ‘Big Bang’ artists express how it feels to be alive in the universe through video, performance, and installations. PLUS over 200 one minute films from around the world add instant moments of life in the universe.”

I LOOK TO YOU (previously titled Unique in the Universe) is a participatory art project which celebrates our individuality and our interdependence using everyone’s unique eyes as a visual metaphor.

The artwork combines conversation, photography, and film to create unique group portraits of friends and strangers identified only by their eyes. Experienced as outdoor or indoor projections, in public spaces, these films are visually striking, intriguing, funny and moving as the personality of each pair of eyes affects us in unexpected ways.

The concept, by Eileen Haring Woods, was originally developed at the Aldeburgh Beach Lookout in Suffolk, UK and launched at the London Art Fair January 2014. In September 2014 the artwork was shown at the Pakhuis de Zwijger, Amsterdam as part of the Interdependence Day event. To date over 100 people have participated and Eileen is currently developing I LOOK TO YOU projects with partner venues around the UK and abroad.

She is also making a new work while in Venice, to be shown on the final day, June 4th. 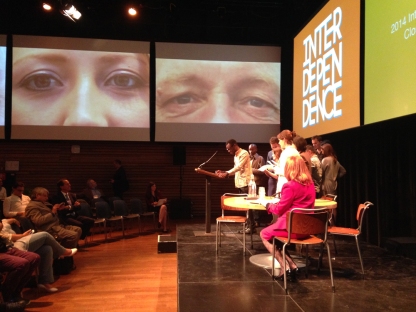